"Bound by Faith ... Committed to Justice."

Raymond L. Flynn served as U.S. Ambassador to the Vatican (1993-1997) under President William J. Clinton and was elected three terms as Mayor of Boston (1984-1993).  Prior to becoming Mayor of Boston, Flynn served as a Boston City Councilor (1978-1984) and State Representative in the Massachusetts Legislature (1971-1979).  During his political career, Ambassador Flynn had the privilege of working with Popes, Presidents and Prime Ministers and was honored to have been personal friends with several catholic saints.  Before entering politics, Flynn was an All-American basketball player at Providence College and was voted to the All American-Academic Team by the Nation’s Sportswriters in 1963.  He was voted Most Valuable Player in the National Invitational Tournament in Madison Square Garden, while leading Providence College to the National Championship.

The Ambassador holds a Bachelor’s Degree from Providence College and a Master’s Degree in Education from Harvard University.  In 2007, he joined the College of Fellows of the Dominican School of Philosophy and Theology in Berkeley, CA.  He has received hundreds of awards, honorary degrees and official citations in the US and worldwide for his faith-based humanitarian work.  Flynn is also a well-respected author and national public speaker on the topics of politics, religion and nutritional wellness and is involved in a variety of Catholic causes throughout the country.  He has written two inspirational books.  His first was a best seller, The Accidental Pope, published by St. Martin’s Press, and the second was a non-fiction book, John Paul II: A Personal Portrait of the Pope and the Man.

Of particular recent importance, Ambassador Flynn has worked tirelessly to find a cure for his grandson who has a rare neurological disorder.  He participates in events and conferences around the world, including the Vatican Adult Stem Cell Conference in Rome where he collaborates with scientists and experts on new findings and research in the Adult Stem Cell field with the hope of finding a cure for his grandson and other children.  The Ambassador and his wife, Catherine, are the proud and loving parents of six children and devoted grandparents of 14 grandchildren.  They reside in South Boston.

Cardinal O’Malley celebrates the annual Red Mass for members of the legal profession Oct. 30, 2016 at the Cathedral of the Holy Cross.
Pilot photo/ Gregory L. Tracy 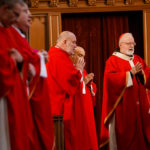